On 2 June 1867 Josiah Spiers spoke to fifteen children in the drawing room of Thomas ‘Pious’ Hughes’ home at 309 Essex Road, Islington, London and pioneered a radical new approach to sharing Christ with children. Josiah taught the children hymns and choruses and told them stories of Jesus in a way that they could understand.

It was also so lively, so informal and so very different from the boring sermons they had sat through in their churches that all the children returned the following week with some of their friends. By 17 November, the Hughes’ had a capacity crowd of 50 children in their front room. They needed a larger auditorium.

On 8 December the ‘Children’s Special Service Mission’ (CSSM) opened in a school-house in Islington with 65 children attending.

A year later Josiah was on holiday at the seaside at a place called Llandudno in North Wales. Holidays by the seaside were a new fashion in Britain at the time, and the beach was crowded with children. So Josiah saw an opportunity.

He called a group of children to him and suggested that they should make a text in the sand. He marked out the words “God is Love” and encouraged the children to decorate the letters with shells and seaweed. When the text was finished, he told Bible stories to the children.

Annie Marston was a young Sunday School teacher in Keswick, in the north of England, who wanted to encourage the children in her Sunday School class to read the Bible each day. Every Sunday she wrote out lists of passages for them to read during the week. The next Sunday she discussed the passages with them, and answered their questions.

As time went by, more and more children asked for the list of passages, so Annie Marston wrote to the CSSM (Children’s Special Service Mission) in London suggesting that they should print the list of Bible passages for children to read. By this time the CSSM was printing leaflets useful for their ministry, however, the first reaction of the Scripture Union Bible Reading Cards from the General Secretary and the Committee to Annie was negative. But she kept writing to them, and eventually they were persuaded to publish an annual card of daily Bible readings for children.

The unique combination of ministry with children and Bible ministry spread quickly to many countries around the world and eventually the name of the movement became Scripture Union.

1892 – Christian camps
In 1892 two students from Cambridge University came up with a novel idea. They wanted to organise a boy’s camp. They wrote: “Our plan is as follows: to collect together as many as possible in tents, to provide for them all the sports and amusements dear to the heart of boys, and while in the midst of these enjoyments, to influence them more by example than by words.” They did just as they planned and it is reported that, “on the last night some of the most unlikely ones (who had come to camp as a joke) told how they found Christ that week”.

1940 – Schools ministry
By the 1940s the ministries of Scripture Union were become more diverse taking on a local flavour. Booklets of notes were published for British troops in the trenches during the Great War from 1914-18, and led to the first issue of Daily Notes for adults in 1923.

After the Second World War, Scripture Union England developed a new kind of ministry in state schools, the Inter School Christian Fellowship (ISCF). The commencement of these school groups paved the way for the development of schools ministry in other Movements around the world. 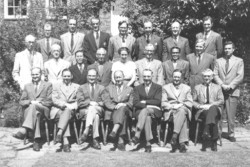 At this meeting six Regions were created with the strong Movements taking responsibility for the establishment and support of Scripture Union in countries within their respective Region. It was further agreed that each National Movement and Region should have their own governing body. The Regions were also responsible for maintaining high standards and ensuring the true essence of Scripture Union was preserved in each new setting.

It was a very timely decision as Scripture Union again experienced tremendous growth in the late 80’s and 90’s when many countries in Eastern Europe, the Former Soviet Republics and East Asia opened up.